The following is a glimpse of the strategic template of the Kalika War Party, the Thunderbird Formation. This template is the working design for a warrior class to be deployed across the planet from November 2014 onward. Its members are volunteers self-selected from many backgrounds, lands, ethnicities, and languages. They renounce all religions and creeds to engage in Gaian Tantra, guided and protected by the supernatural powers of the shock goddess, Kali. This unique band of warriors embodies and implements the rage of the earth itself, the wrath of the planetary animal mother.

Kali Ma says, “Either you are party to my supernatural magic, or you are rubble.”

Kalika (KAH-lee-kah) means “of, from, or belonging to Kali.” The names of the bands denote specific infernal powers of Gaia, “dakinis”, “mahavidyas”, supernatural witches who oversee the actions of the Party. Mostly derived from classical Sanskrit lore, these names may vary according to who uses them. Some dakinis have names from several cultures, and they may have nicknames or pet names as well. The Gaian dakinis never state their own names, but acquire these names as humans identify them by co-acting with them. The Gaian dakinis match closely with faeries (Celtic), loas (Haitian voudoun), devas (Hindu), and so on. All these are terrestrial female powers which operate simultaneously in the depths of the earth, the sky, and the human psyche. SC indicates the source of the numerical array of these powers: the Shakti Cluster. Like “transformers” (shapeshifting robotic action figures seen in video games and marketed as toys), the Thunderbird Formation is a transformation of the Shakti Cluster with its 18 components intact, but arranged in a different way, dynamically reconfigured. The eye of the Thunderbird is number 18.

Each line of engagement, defining a rank, represents a set of operations essential to the dynamics of the entire Party: imagine the different parts of the body of an eagle, all working together when the eagle flies, lands, and strikes its prey. There is no hierarchy in the Thunderbird Formation, as there is none in the bodily functions of a magnificent raptor like the eagle. All bands are laterally aligned, functional in particular ways and equally important for the strategies, tactics, and operations of the Party. Hindu Tantra gives the name kula or kaula to these bands. Kula means “ass, pelvis,” but also “clan, tantric family unit.” The Mahanirvana Tantra says that at the close of Kali Yuga the supreme magic of liberation is known and performed exclusively by these clans, whose members are called “kaulas”, COW-luhs. In jargon, Kali-worshippers can be called cow-lickers, ass-licking tantrikas. The trope comparing the Great Mother to a cow alludes to a specific mystical experience: hearing the sound of the living planet as a low groan rising from the ground, which sounds remarkably like the lowing of a cow. From November 2014 onward, this sound becomes audible to many people around the world, given they have a natural setting that provides sufficient silence to detect it.

With the assignments defined, specific targets come up in the sights of the Party: banksters, currency traders, heads of corporations, lawyers who defend perpetrators, pedophiles, theocrats, propagandists who foment race wars, religious ideologues, media shills, and many more. There is no lack of targets! Kalika warriors decide on an individual basis, or in consultation with other warriors, if a target has to be terminated or merely neutralized. Threat display against targets is one of the prized tactics of the KWP, to be handled with consummate skill. “Make no threat that cannot be implemented” is a strict rule among Kalika warriors.

Knowledge of that which is alive can alone banish terror.

The KWP is a counter-terrorist elite strike force using shamanic magic and other weapons to attack all aspects of social evil. Kalika warriors profile terrorism on the planet today by its initial historical source in religion (the “Z” factor) and its current hydra-type expression in the corporate politics of the State. Kalika warriors stand up against many lies, starting with the mother of all lies in the modern world: “The State protects the people against terrorism.” They act directly on the brutal truth that can no longer be hidden: the State is the primary source of terrorism against all peoples of the world. Countering terror requires striking against the State. It means frontally attacking and taking down the “authorities.”

Judas said, “Behold, the authorities (archons) dwell above us, so it is they who will rule over us.”

The Master replied, “It is you who will rule over them, but only when you rid the world of envy, take upon your minds the divine light, and unite in sacred love (in the bridal chamber).”

To banish the ultimate terror on earth, Kalika warriors bond themselves to that which is most alive, the source of all life as we know it, the earth itself. In declaring war on psychopaths and the enemies of life, the Kalika War Party also declares the end of a widely cherished illusion: “The earth is a stage where history unfolds.” They declare that the earth is no stage, no mere passive setting for human action. They follow the instruction of the Sophianic narrative: history is merely a dream of the earth, a nightmare from which the planetary animal mother, Gaia-Sophia, now begins to awake. She is waking in a lucid dream and seeks out those who want to meet her “in person.” The unparalleled power of that wake-up event now reaches human hearts like an irresistible swell of music that moves you to motion and tears. Sophia’s beauty now breaks into the human mind like a tsunami. Riding that wave, “in the curl,” is the Kalika War Party. 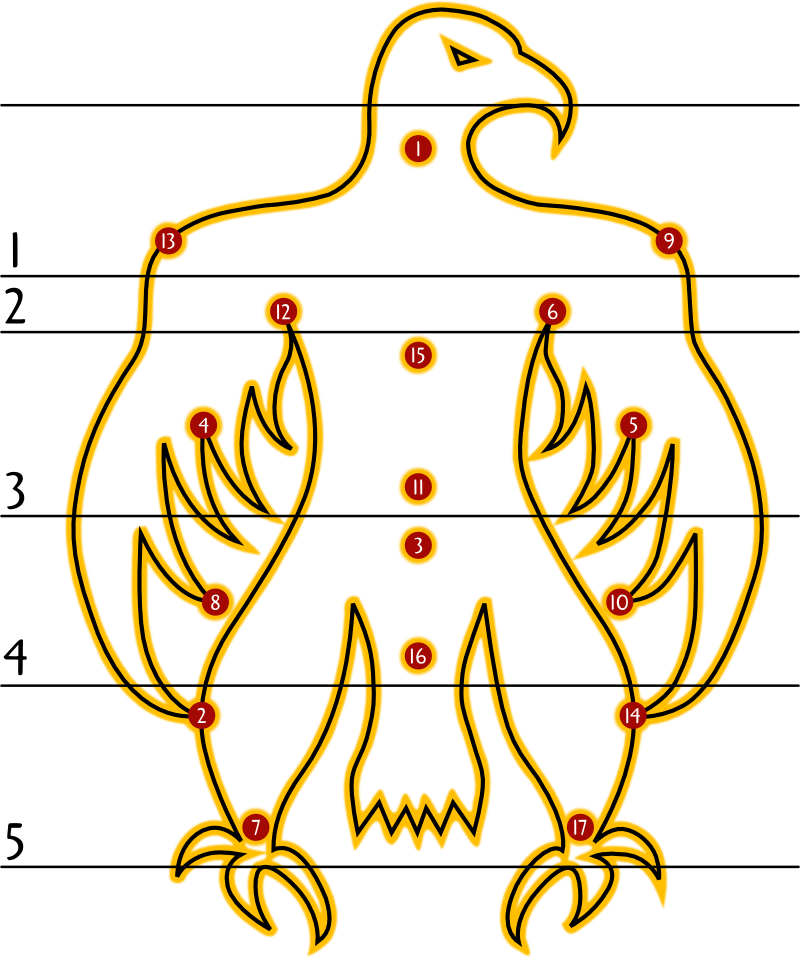 18 Eye of the Thunderbird

Head of all ranks—leading position

NOTE: Special protocols regarding sexual behavior and gender apply to the first three bands, as explained (*). See more under Protocools. In all other bands, women and men mix freely and randomly.

The primary weapon of termination in the KWP is the Kalika lethal strike, a ritual method of killing at a distance, APA, “in the absence of physical agency.” Using this ritual, the Kalika strikes with no physical contact with the target, no intermediary, and no detectable weapon such as a gun, knife, explosive, etc. Application of the lethal strike is mandatory for the five bands of the first two ranks, and optional for all other bands. Anyone in the Party can use it, but due to the nature of the enemies to be engaged, these five front bands have to use it to accomplish their assignments and eliminate targets. Other members of the Party who opt out of this practice can participate without taking life, using forms of peaceful aggression such as dissent, sabotage, attack on lies, demolition of social agendas of deceit and division, and so forth.

aka Bhuvaneshvari, many variants of “Mother Earth”, Lakshmi (Hindu)

aka Channel 16 in the GNE: telepathic network

aka Our Lady of Smoke, the Sweeper, Crow Woman, the Gitana

This compilation provides some initial clues to the assignments of the bands. A complete picture of assignments, weapons, and targets can never be achieved or fully and definitively stated. These factors expand continuously into definition and action as the Party emerges.

To keep current with the expansion of the Party, Kalika warriors often play a game called “KWP Quiz Time” by asking: What band of the Kalika War Party has the assignment…say, to attack the historical lie about the Holocaust, or take down the record industry, or stop fluoridation of water? Each time some aspect of social evil comes to mind, you can ask which bands takes on the fight against it. In this way, the specialities of the 17 bands can be defined with great precision over time.

How to you know where to take your stand in the bands of the KWP? The positions are self-assigned, but what are the criteria for choosing a band? These criteria can vary depending on the passion, perspective, and sense of purpose of each individual. Be sure of one thing:

Defining your position in the bands will be a defining event in your life.

Perhaps even THE defining event.

There are two approaches for placing yourself in a band:

Consider your highest passion in life, based on what you consider to be your strongest skill or talent. Then ask yourself how that talent could be applied to the assignments given for each band, until you hit the one that fits. Or designate a new assignment corresponding to the mission that your passion compels you to pursue… Then, in discussion with members of the Party, you can determine to which band that mission can be assigned.

Another approach: Try to narrow down what you hate the most passionately about what is happening in the world due to the apparent dominance of the enemies of life. What do you hate most deeply in what you see being done to harm humanity? This approach, if you can focus the hate, may lead you more rapidly than any other to your place in the bands of the Kalika War Party.